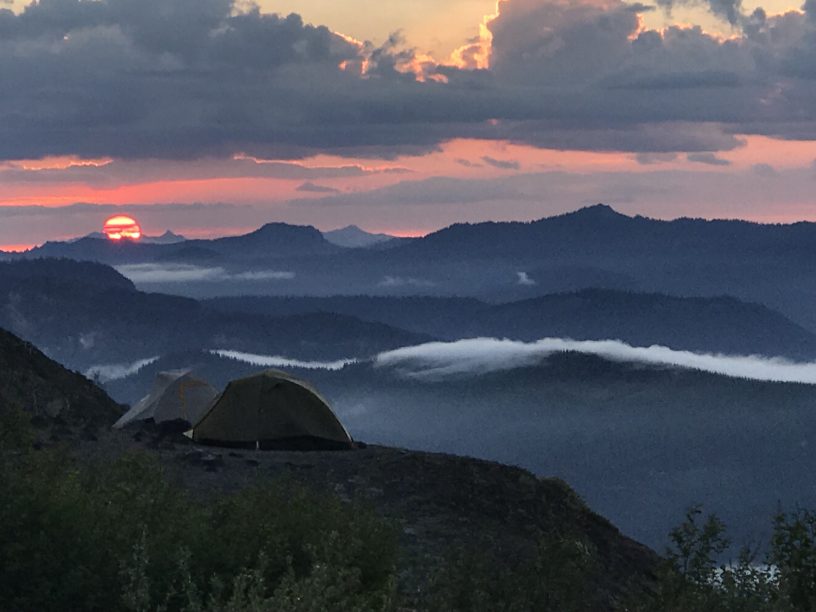 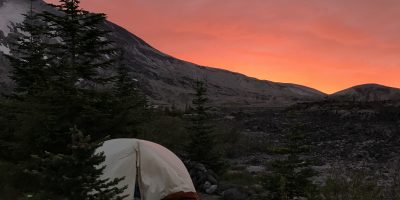 The rain began with big heavy drops just shortly after midnight. I’ve never been so grateful of a tent before – luckily I had pulled in most everything into the vestibules before falling asleep in a make shift effort to shore up the tent against the wind (somehow, I could not find the stakes).

So the rain may cometh, but I sat sipping the sweet smells of a fresh rain at 1:00 am. It smelt wonderful, especially in the luxury of dryness.

Adversity promises the greatest rewards. The contrast of the morning sunrise made a midnight downpour a mere trifle There are times when you experience a moment – live an experience so fully that you feel like you have redefined a word to a new meaning. You’ve lifted the english construct to a higher ledge of abstract beauty and richness in meaning. That’s what it felt like to see this morning’s sunrise and think of the only wonder that cam to mind, and redefined and refined: SERENE. Even the wildflowers were raised expectantly to the imminent flood of sunshine while all my neighbors – and my former self- lay a slumber. Walking on the morning when the air was crisp, my mind sharp, and the light impeccable, I was reminded of Thoreau’s pontification on the moral rigor of a man who greets the day with the fiber of labor. I could understand the moral high ground now, despite my typical laziness – and biological proclivity – to stand there My views were doubled, as mountain peaks cast long shadows allowing me to view two for the price of one. My companionship was doubled as I enjoyed my long shadow – long absent in my daily life. My ease was doubled, as the cool crisp air and rested muscles lifted over the passes with comparative ease. I heard two coyotes talking across the mountain, clearly communicating back and forth. The one on the mountain was long and whiny, and amplified by the canyon he was in. The female on the bottom was happy and filled with tremelo and vibrato – answering each call quickly, but yet never on top of each other.

I have lost count of how many times the trail has simply washed away or was covered over, leaving just a solo cairn or a wood pole – when lucky – to guide your way. This trail is by no means easy. I reached windy pass and glimpsed Johnson Ridge Observatory – my destination – at nearly eye level. I also was reentering the blast zone where camping and off trail walking is prohibited. Climbing down from the pass, I watched a dense cloud come over a pass like a marching army … … until it invaded the entire view and march right on up the mountain. In its wake it left an every diffuse glow. The sun launched a counter offensive and I watched the battle ebb and flow from heat to moisture throughout the morning. The alpine lupine (technically prairie lupine) were in full force on these slopes. They had found their niche and dominated the landscape without competition. I also passed by this spring on the mountain that radiated with more diverse life – reminding me how water is by far the most important component to life. I climbed upwards on to the mountain in one last kiss goodbye to it. It yielded a great view of Spirit Lake still laden with floating logs from the eruption almost thirty years later. Next, I took a detour to Loowit falls – it has been long time destination of mine, but always out of reach given the remoteness of the mountain and the distance from trailhead. It was great to claim this accomplishment. I listened this morning to more of David Brooks’ The Road to Character. I enjoyed hearing the biblical proverb “he own conquers his own spirit is greater then those who can conquer cities”

I reached the end of the loop and rejoined the trail to my starting point. I also contemplated Brooks’ assertion that we need to reclaim the word sin in the modern context. Today it is relegated to the use as in indulgence in chocolate or the zealots use in religious undertones to remove joy in life. The word sin itself evokes strong reactions against it – but Brooks smartly holds firm in its use and not coddle it with a lesser word like “mistake” or “error” as those do nothing to reflect how sins eat away at character while mistakes in their freedom from consequence do not.

But there is truly sin – not fire and brimstone – but rather the daily sins that we all make when we speak without listening, stretch a truth, put yourself above others – not to mention the greater sins of the commandments. His frank and non zealot writing on the loss of awareness in the dangers – and mere presence – of sin in our daily lives was eye opening. I have always eschewed morality and ethics discussion philosophically from a relativist position – and have always treated it with distaste from a religious proselytization position. And of course I abhor the psychological trauma created by southern baptist zealots on original sin and a lifetime of moral debt and indentured servitude to the church to regain self esteem. But there is still room for morality between those poles in the daily life – and I, like my entire generation (plus one before and after), seem to have lost their hold on this character compass.

Two more proverbs that struck me –

These all passed through my thoughts while I marched up the slopes of Johnston Ridge and back to JRO.

Wading through the throngs of people now present, I was re-immersed I to society, and found it sadly lacking.

But I found my first cell connection since leaving and connected with my father. It was only mid day, but I was beat beyond belief. I had a hearty reunion, toured the JRO with him for a bit and then made the trek north via truck. We landed in Redmond for the night in a fancy hotel while I tried to figure out my next steps.