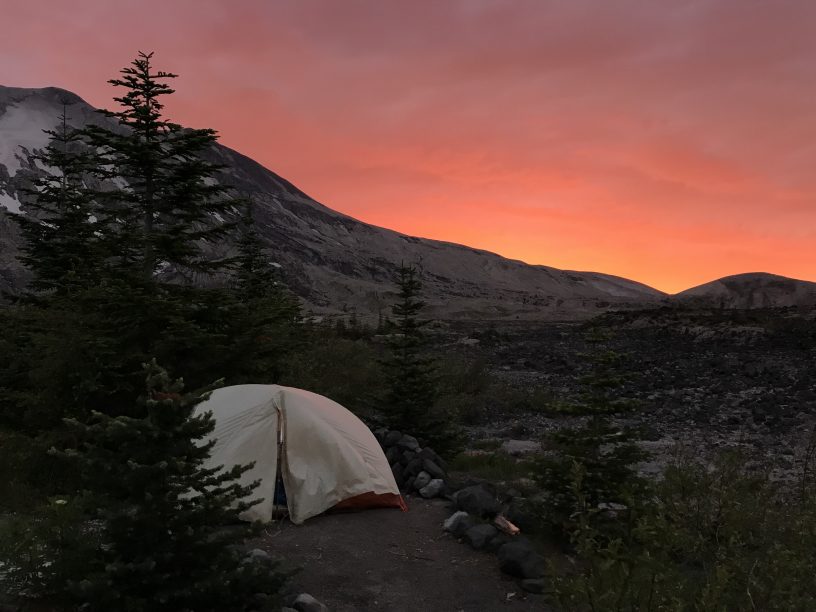 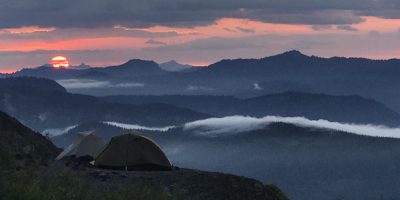 Woke up to a beautiful, hot (lower 70s) day – hallelujah. Taking an Advil for that fierce headache, I set about morning camp chores The waterfall from last night had disappeared with the night (it is driven by snow melt, which slows to a trickle in the sunless and cooler night). Notice the fellow hikers that passed by to give a sense of scale to this image: I set about refilling my empty water containers in a residual pool and realized I’ve done little to document the details of light(er) weight camp living. Maybe for the future.

The day was fabulous and the hike was amazingly easy. I clocked in 6 miles before I knew it, with a number of deep ravines. Amazing what a good trail and a nice day will do. Bear grass were everywhere and they providing icing for the cake in the form of little white Fourth of July fireworks along the trail. They really are beautiful when viewed close up as well. I’m looking forward to hearing from my survivalist daughter on how to eat them. The trail alternated by amazingly lush forests as if I was on Mt. Hood, … then back to boulder strewn moon walks. The trail soon reached a series of peaks where I could see all four volcanos – Hood, Adams, Rainer and Helens. Even a glimpse of Jefferson. I was in heaven. Of course, there was the occasional massive canyon to cross … … and soak those Achilles in … … only to climb back out and get them back to where they were before. The northwest side of Mt. St. Helens was by far the best. Easy traversals. Large plains of pumice (Plains of Abraham). And a textured Helens that really showed off its prowess as a feisty young volcano.

I made it to an ideal camp, complete with a tremendous view of Adams. But I knew I needed to put more mileage in so I continued on to the next camp at Windy Pass. After two miles and seeing the site from a distance, I promptly turned around and setup shop at the previous site. I soaked my feet in the snow melt with an unobstructed view of Mt. Adams. Bliss so great I felt undeserving. I laughed as one pumice stone after another floated in the runoff and off over the waterfall. Oh, and did I mention that a family of mountain goats also joined me for the view? I met four other parties and convinced them that this spot was much preferred, and now have more company than I do at home.

I made good friends, bolstered in my uncomfortable extrovertedness by the beauty of the location. When asked if I was waking up early tomorrow for the sunrise, I responded wistfully with a smile – “that’s the plan, but then, that’s been the plan every day for the past two weeks”

The sunset promised to be beautiful so I made dinner and prepped for tomorrow so that I could enjoy the show. Clouds came with the winds, however, and instead of a brilliant alpenglow over Adams, I instead watched the slow tip toeing of the sunset creeping up the slopes of Adams until poof, without color or fanfare it was left in the dark. It was immensely serene, alpenglow or not. I then made preps for an early sleep when suddenly I realized my tent was all orange. I peeked out and saw that a beautiful scarlet sunset was occurring on the backside of Helens. She was in alpenglow, but on the side just away from me. The colors were radiant and it made me think of a snippet of translation of Lao Tzu’s Tao Te Ching:

Existence is beyondthe power of words to describe

Words may be used, but none are absolute

If a word be needed, let that word be wonder, and from wonder to wonder, existence opens.