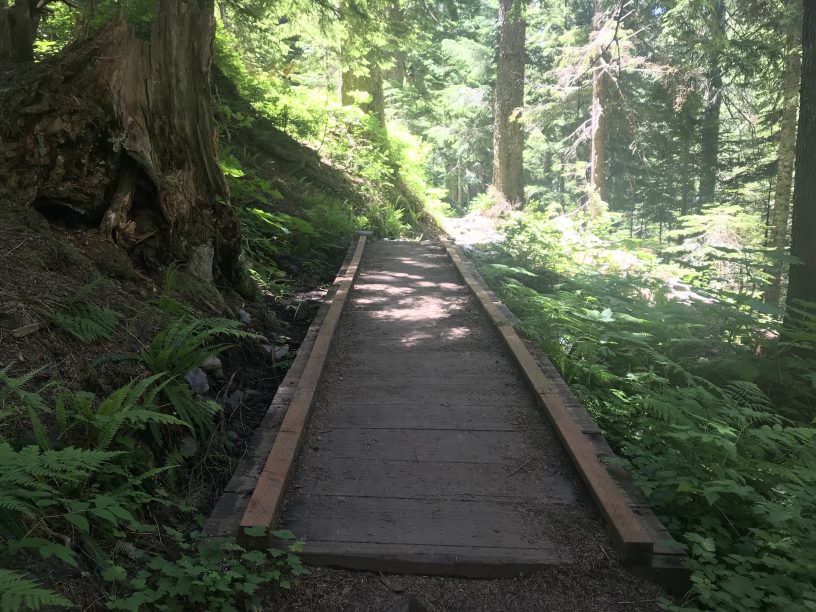 Nature’s 5:00 alarm went off like clock work, but I was not an equal participant. Instead I channeled all my energy from my brains consciousness in to the subconscious healing of my Achilles and calves. By 7:00 I was able to wake up and 9:00 able to depart. To my smug satisfaction, the two twenty year old overnight camping girls sleeping the next tentsite over walked by in their underwear while I was heading out for the day. It’s all relative. I only had a “few” 9 miles to go today so I thought I could breeze through the day no problem. I soon met my first southbounders for the day – Bearsock and Cowboy – two really nice guys that gave some good insight on the trail ahead. They also still struggled with Glacier Peak. Bearsock got his trail name by two Army Rangers on the trail (Mighty Mouse and Primal) for a combination of sleeping with his food in bear country and because he left his socks out in his vestibule only to find them stolen by some marmots in the middle of the night. I also met my first snow in a while. The frequency of the south bounders was increasing. I met a nice Aussie named Walkabout – he is even doing the New Zealand traverse after completing the PCT. “I’ve worked 10 years and needed a break”. Thus far, the Sobo’s seem to trend older and more independent than the northbound counterparts starting at Mexico. Most are in their mid 20s to mid 30s – and a lot of soloists (Same as me – or at least feel. ) As I have travelled my Canterbury tales in this section, I realize just how much each topic – pride etc – pertain to the rigors of the trail alongside the rigors of life. I need combat self control to keep the passage going, I need to find determination to overcome the yelling from the muscles. I need to combat with pride in my brief communications. It is a reminder that character evolves and is tested every day.

Pride is building your happiness around your accomplishments, using your work as the measure of your worth. It is believing that you can arrive at fulfillment on your own, driven by your own individual efforts.

Brooks wrote of the two types of prideful people. There is the puffed up “Donald Trump Version” and …

Thus, I was still mulling over the concept of Pride and just how much work I have to do on this front. The self aggrandizing, self absorption, self pity and the craving for external validation are all flaws in need of adjustment within me. They are rooted in Pride and solved by humility.

For today’s focus, I listened to the biography of Augustine and his epiphany. Augustine was having the successful life but realized that his inner needs were not being fulfilled. He went through an epiphany, an agency, where after intense internal evaluation he concluded that his fulfillment in life was to let go of being the master of his own ship, the captain of his soul. To do so, he reached it through connection with God.

The rendition of his life was a Siren song for me, but sweet with a poetry that I can’t follow. But there are many lessons there for me to draw from. I also thought of one of my wife’s mentors, Dave Johnson who emphasized over and over the difference between character and reputation. That emphasis clicked into another notch today – and it was my pride that was in the way to understanding. A good part of the mind realization was on the topic of humility. I’ve always thought that humility is a trait that is most correlated with the people I admire the most as beacons in the distance for who I want to be. Understandable, as I’ve also come to realize pride is one of my greatest weaknesses. But humility is a tough nut to crack. It seems to be binary in nature – you have it or you don’t. And feigning humility seems to me to be one of the most grating offenses – a thinly veiled serpent of Pride grown outlandishly. Humility must be rooted in the low, not just the observation of low.

Here is another section in a similar vein from Brooks: This all had me going for some time – well and probably still does inside. I like the direction but not the solution. But it is a good guide marker to achieving true humility.

Lisa Fullam: “Humility is a virtue of self-understanding in context, acquired by the practice of other centeredness.” Coming into town.. the roar of I-90 (above) became ever present and would remain so for another 24 hours. Just hearing the constant din.. seeing the angular metal of a parked car on dirt road crossing for day hikers – I saw these signs of civilization as animals must see them. And the rush, the speed, the urgency, the busyness of business. It all reminded me of the railroad references in Walden, written 150 years ago in a time we think of as less urgent. I eventually (ridiculous word that represents my emotions – but not the reality of the miles) made it to Snoqualmie, an interstate rest stop and minor ski slope town.

Coming into town, I was further struck by the ridiculousness of modern society. Perhaps I was listening a little too much to Thoreau, but I could feel the disdain and culture clash as I saw vignettes of ridiculousness. For instance,

Now I will not go so far as to steep myself into Thoreau’s disdain for societal living from his high perch at Walden Pond. But the racing to get one thing and all the while achieving the opposite seems to be pervasive in my fresh encounter into society. I love my fellow man, and I strive to find the blossom of each persons soul in finding meaning (particularly those who acknowledge such pursuit) – but the sharp contrast from trail life was a had swallow this evening.

I went to a small food cart (an amazing thing given then small size of the town) – it was the hiker gathering point. The cart gives a free Rainer to every PCT hiker and keeps a “hiker box” where hikers can donate their excess gear and food for others. I met a whole series of people doing the sobo hike to Mexico. It was an interesting group – more alcoholic and pot based than the ones I met on the trail. The contrast to those on the trail was palpable. I soon found out some of them had been there for days … and honestly, you are not allowed the luxury of multiple zeros, particularly on the southbound route. Yet another exposure to the PCT tribe. I also got done all of the chores needed from civilization: home checkin, food resupply pickup and allocation, cleaning of everything, blog updates. As such, I was up until 12:30 am – and a long way to go tomorrow. There goes my ambitious 5:00 kickoff tomorrow morning.