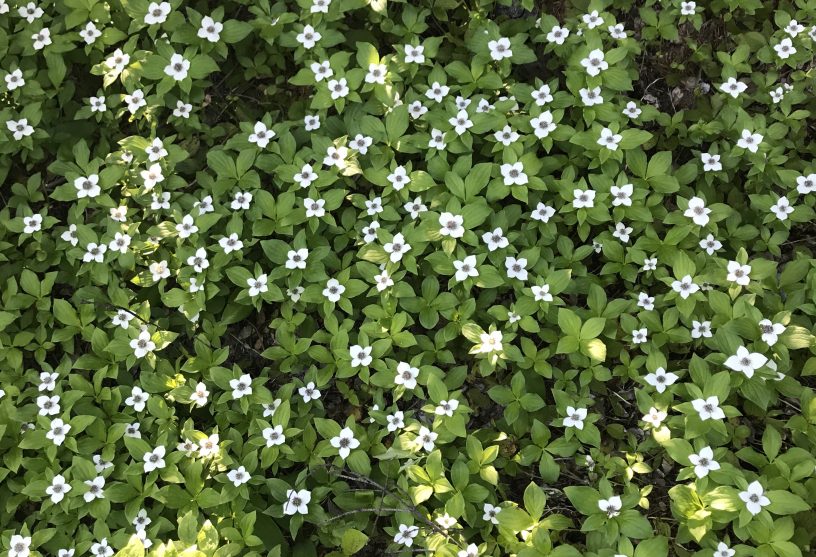 This morning I awoke to the site of a battleground. My will to see alpenglow on Rainer was in a fierce pitched battle with my will to oh, just let me sleep. While alpenglow won out, it was a Pyrrhic victory – I was so exhausted that I laid back in bed, craving the return of the subconscious. I hit the trail, ignoring what my legs were telling me. I continued my education on Character. I realized as I moved on to George Elliott’s biography that I was making my own Canterbury Tales, complete with a long trail for pilgrimage and daily sins to avoid. Today was focused on Pride. I was very conscious in hearing of George Elliott’s early life, that I too suffer (but still do) with a heavy dose of self absorption, or as Brooks says “luxuriating in my own capacity for emotional depth and savoring the sense of my own epic proportion.”

To be a poet is to have a soul so quick to discern, that no shade of quality escapes it, and so quick to feel, that discernment is but a hand playing with finely-ordered variety on the chords of emotion–a soul in which knowledge passes instantaneously into feeling, and feeling flashes back as a new organ of knowledge.

Speaking wide eyed and honestly, I am still a victim of my own youthful solipsism and am keenly needed for an awakening on this front. The penalty is pride for being mired in this self absorption. Lord knows, this blog is yet another instance. And so I have to put about the business of controlling Pride. Invite him over for dinner in the safety of my mind, and then promptly put it in its place. I need to invite Passion alongside at the table and give it meaning and direction, lest it be romanced by Pride, only to have me find them behind closed doors in a romantic tryst. Thus with the walk today, it was clear that of all the work I have to do to whip my Character into shape, Pride and Discipline need to be my greatest efforts. External validation needed to have a strong rooting out. Back on the trail, south bounders began to appear with more consistency – like a trickle before the flood. I met a gal today that was so exhausted from the Glacier Peak passage she wanted to quit. I gave her encouragement, but what I realized I should have said afterwards was: “it took more courage to be on this trail than it does to walk it. Dig deep and find the strength – you have more of it than you think you do.” The trail thus far has been devoid of waterfalls, but they began today in small doses. This one was particularly beautiful – reminding me of the “more perfect Nature than Nature itself” that the Japanese gave this incredible talent to find. The image above shows the dancing of water on dark angular surfaces. At the top of the small fall, water slips through a crack only to land on a prominent angular outcropping, forcing a splattering over the entire falls. Meanwhile, sunlight is streaming down, illuminating the very spot where the water goes splaying. It was hard to capture in imagery, but it was simply … perfect. Oh, and a frog joined me in enjoying the falls while I was there. The trail was lovely – not grand vistas, but good comfortable woodland hiking. The final miles today were truly painful. I had a 1,000 foot elevation gain to get to a campsite that was potentially overrun with Day hikers (we were getting close to Snoqualmie Pass). I made it but was in real pain, collapsing into my tent. I had just enough time before sleep issued its warrant on my consciousness to take a shot of the lake by which I camped – aptly named Mirror Lake.