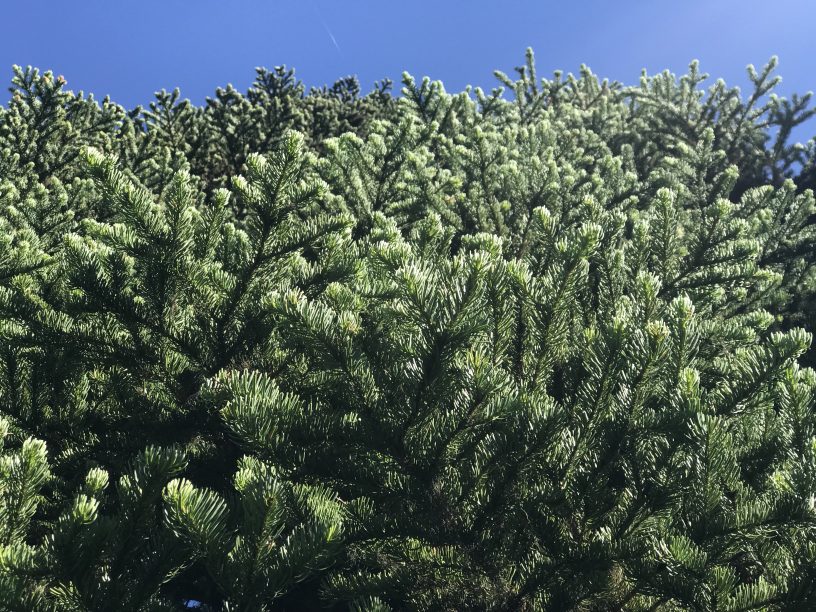 It was another very cold night and I was awoken at 4:30 by birds. I finished up my blog entry from yesterday and got moving at 5:30. Unfortunately, the assortment of camp duties that have been neglected (drying out the fly, cleaning cooking materials, drying out clothes, etc) delayed my exit till two hours later. Sure, maybe the view also had me lingering. The day turned out to be just one of those slog days where you push to get mileage and yet the mileage pushes back and you go slowly. I enjoyed one break at some rock outcrops looking back at Rainer. Three northbound women marched by in a fast unison pace while I was there – they never even noticed my presence they were so mechanical. I enjoyed the view instead, including this fun view looking up, making me think of sea corral: I met another trio later in the day heading south, plus a guy name Jeff. I also met the first person older than me – a Canadian named Henry that was doing the hike from Cascade Locks. My readings for the day was on dignity, but nothing strongly struck a chord on it. After my morning full up, I only had really one main fill up spring. It was a bit off trail, but featured a cute little waterfall for the trouble. I did dare the most amazing and biggest psychedelic mushroom – but failed to photograph it. Mileage was so slow and soon I found that everyone was ducking into available campsites along the way while I was slogging forward with my own March – just to get a modicum of miles in. I didn’t even realize the accumulating ascents, I was so intent on just pushing forward. A slog, but a beautiful one: At the viewpoints, I saw the mountains to the north that may soon become my companions: Also encountered a tree fall that hit just perfect bullseye that it splintered the other tree into fragments, like arrow splitting arrow. And then I found this strange marker on a tree: I finally came to a windy ridge line that on one side had a stellar view of Rainer and a small secluded place for a tent – perfect. I settled in for dinner with a view – a perfect room with a view. I enjoyed a freeze dried meal of chicken and dumplings. Delicious. On the other side of the ridge was a view of the mountains North, and two wonderful bars of LTE.

I played with Peak Finder to tell me the names of the northern peaks – suspicious that I would soon be encountering them a little more close up. I made use of the LTE for a call home as the sun began to set majestically. I settled back to watch the show. As any of you probably know, I make plans around alpenglow. And tonights performance did not disappoint. Seeing the alpenglow tonight made me have my one and only strong thought – man, I am lucky to be alive.