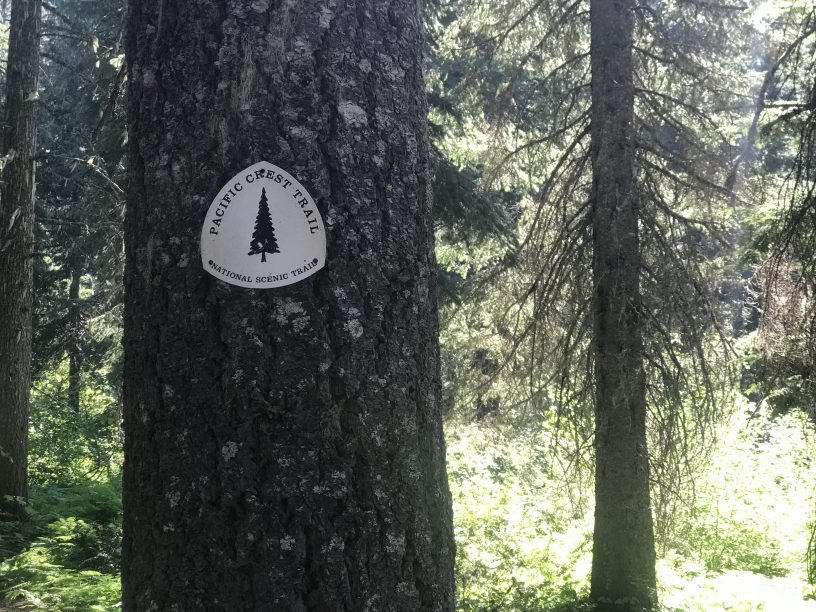 I woke up early at 4:45 AM and all the problems that hit me were solved in seconds:

To #2, I was then on the trail by 6:15 AM. I went back a half mile on the trail to see if the FitBit happened to be on the side of my last water fill up. Amazingly, the water level had only increased over night.

I headed on the trail hiking up the valley and then up the side of Chief Mountain.  Across the valley, I could see Lemah Mountain and watch the shadow of my new mountain protect me from the morning sun. With the early morning start, I felt the same energy I did on my last day on the Loowit Trail. And this time, it was watching the mountain’s shadow that spurred me on. I knew that I was in a race – I was racing to the top of my mountain while the sun and its heat was racing the mountain shadow to the bottom of Lemah mountain. The competition spurred me on through the switchbacks and 2500 ft elevation gain – I had a long way to go today, and I stretched my legs and endurance and leaned in.

The trail up was at times sketchy. The below image was taken looking straight ahead on the trail, which runs straight down the middle of the image. Only your feet knew there was a trail to follow. Consider this my “Where’s the trail, Plant Edition” image. The trees also held a distinctly different feel than in previous PCT sections. It was clear this area was drier, but yet wet from the local streams – causing birch to be more prevalent. The hike up Chief Mountain was a dry hike, and thus I filled my water bottles up at the base. This is not minor – as it adds an extra 6 to 8 pounds on an uphill pack. It became quickly evident though that the entire mountain was draining the snow in the heat and that water was everywhere roaring down the mountain. I definitely needed to work on my water management skills. At a viewpoint halfway up, I saw that I was losing in my race up the mountain against the shadow. I let the views be my consolation prize. Also, the water fall just barely visible across the way in the image below was also shooting out of the side of the mountain at high velocity. The force of summer melt was amazing to behold. Now is the “Where’s the Trail, Tree Edition” image. This blow down was the first on the trail requiring me to fully remove my pack in order to cross. With a third of the way still to go, I met two older gentlemen coming down that were doing just the Stevens Pass to Snoqualmie Pass section. They asked about the cobwebs – yeah, cobwebs. You see, there were cobwebs EVERYWHERE on the trail up. You could not go five feet without running through another one. I thought it was just me or bad luck – but they confirmed it, the spiders were out in full force to match the budding mosquito population. We joked that we cleared the way for each other as we went our separate ways- which turned out to very much be true.

At last I reached the peak of Chief Mountain and was granted another spectacular view of Mount Stuart rising up in its prominence. At the crest, the trail turned to explore an alpine bowl and lake, where I stopped amidst the wildflowers to cool my feet and enjoy a lunch. To my enjoyment I met up with Henry yet again. This time I was able to beat the early riser, but my dallying in the beautiful alpine environment over lunch gave him ample time to catch up. Sadly, it turned out that this was one of my last times to see him before our ways parted. I also met a south bounder that goes by the name “North Pole”. It turns out that during his own harrowing crossing at Glacier Peak, he slipped on an ice field and broke one of his hiking poles and began to slide down the mountain. He managed to use the jagged broken shard of his hiking pole to self arrest and stop the fall. Wow. The trail continued on giving great views to the next mountain in our sights – Bear’s Breast Mountain (above and below). It is a demonstrative mountain in its curves and features. It dominates the features around it – but I could find little on the web to give insight into its naming. Walking down the slopes to the Waptus River valley floor, I began to encounter more and more southbounders. It was as if the flood gates had finally opened (or should I say “snow gates”?). I wasn’t able to get all the names, or even all the names written away. Here are a few that stuck with me: PCT Trail signs are a currency on the trail. There are many different variants to find along the way – almost like bragging rights if you can reference a rare design. While not the oldest by far, this was one of my favorites – and a one-of-a-kind. By this point in the trail, I had reached my afternoon slump and needed some push to get through the remaining hours – particularly knowing that this was going to be a long one. On the last section, I explored different aspects of Character using David Brooks’ book as a guide. This section has been so beautiful that I haven’t yet started a book – but now was the time.

I decided to start listening to Ayn Rand’s Atlas Shrugged. This seemed to be in good contrast to Brooks’ moral high ride, and yet is unabashed in its defense for “Adam 1“. I also spent a little more time reflecting on another reason why I decided to go on the trail: pivot points. The concept came to me through a conversation with my Alaskan friend Phil – who I hold in the highest of regard. You see, humans crave motion (well, at least I  do). And like all bodies, we also are ruled by inertia – Newton’s First law that an object in motion stays in motions applies to us as well. Thus, in order to affect change in our direction, in order to affect the vector of our heading, we need to apply energy into our motion. But without a secondary influence, we can no more change our direction than a bowling ball can change course once released. We need a pivot point – something firm and external – something large and implacable by which we can pivot around in order to affect change on where our lives our going.

To me, the PCT is that pivot point. It is massive, and implacable. The weight of the distance and the demands of the endurance give it something to hold on to while making changes in the direction of life. The distance traveled and the distance from the Day to Day are also pivot points, where the distance of each give me a further leverage – like a crowbar unloosening some stuck lug-nuts in my being. The growing platform of readings from trail –  of Rand, Thoreau and Brooks are also providing a pivot point, like a diving platform and my hiking feet are curled around and pushing off of the concrete edge.

This is why I am here: to find a pivot.

Alright, enough with the thoughts for the day. One last image that needs an introduction. While walking on the trail I came across this bizarre snake. It was a deep green olive color – in fact, it looked like a giant long skinny slug. The snake hardly moved at all when I came upon it – just a bit of slithery tongue action. It turns out that it is a Boa snake (a Rubber Boa to be exact). They are known for being incredibly docile – so much so that they are used to treat the fear of snakes. So now a few words to close out the day. I was pushing 17 miles when the light was getting dark and I hit my intended tent site – only to find it full. Yikes.

So I pushed on hard, fueled by electrolyte gummies, to get to the next campsite three miles further. Along the way the mosquitoes got worse and worse. I donned my head net and my rain shells to help protect my points. My only exposed skin was the upper two digits of my fingers as they clasped my hiking poles – and even then, they still were getting feasted on.

At one point I hit a river requiring fording and I stopped for all of 10 seconds to switch to my wet socks before being completely overwhelmed by mosquitoes. And thus in I went. I had no idea how fierce of an animal adversary mosquitoes were when swarming. I honestly felt I would have better odds with a bear or cougar encounter.

I pushed through to the camp site which was along the edge of Deep Lake. There were plenty of tent sites amidst the snow drifts and not a soul in sight – and that was of course because the mosquitoes were so thick that the merest moment of pause resulted in tens of them landing on you. It was amazing how thick the swarm was.

The mosquitoes were also highly trained to the swarm affect. In order to maximize their likelihood in their numbers to score a blood point, they used a different technique. When its just a few mosquitoes (you know, like 20), they will hover around you and wait for just the right moment to land – and then walk around a bit to find the best place to drill. Then, if they aren’t shooed away or see signs after a 5-10 seconds or so, they drill away.

Here, however, the mosquitoes had perfected a kamikaze dive bomb in which they would fly at high-speed, land, and drill in under a second. It rarely succeeded – but for those rare moments in which I had the slightest gap in my bug net – or my fingers were held stationary in the back forth sway of the hiking poles – invariably at least one mosquito would strike pay dirt at my expense.

So 20+ trail miles in, I was beat. Darkness was arriving. And I was camping in the worst mosquito location on the whole trail thus far. I had no choice. It was now my second race.

I set up the tent forgoing the ground tarp next to a snow drift – getting it in place in about 4 minutes time. I unzipped the tent, threw in my pack, and zipped it back up. I then danced around on the snow drift, then threw myself into the tent and quickly zipped it back up a second time. I killed with delight the ~25 mosquitoes that managed to make it into the tent with me. I crushed them with abandon, not a shred of passivism in me. And finally, I breathed a sigh of relief. I was done for the day. And done for – no more arguing against the exhaustion. For the first time, I did not take a tent picture.

And what do you know… while unpacking for sleep, out slipped my missing FitBit!

Slipping away from consciousness, I smiled in now knowing that I had walked more today than any other day in my entire life. The fitbit had been tracking all the steps while in my pack.