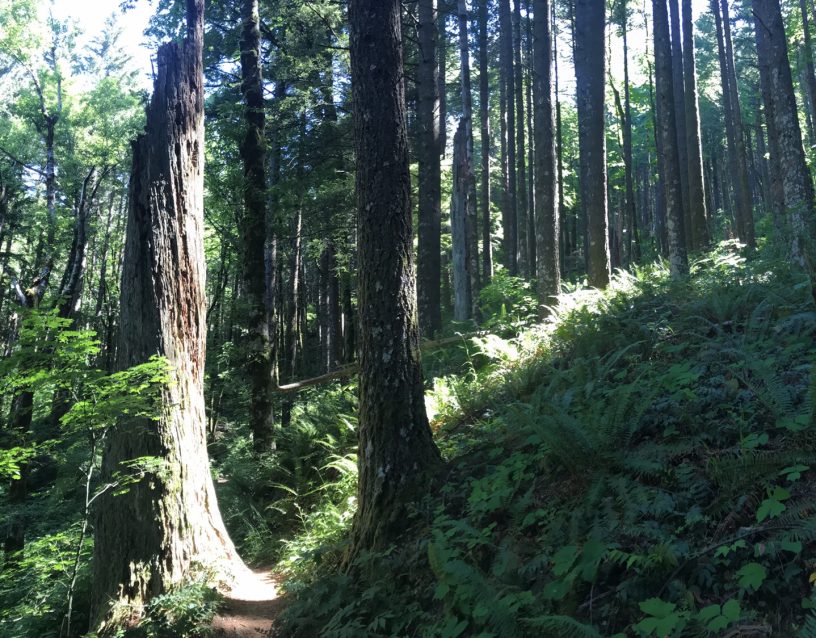 Today in summary was a day entering the fold of the forest. The feeling is like that of haunted houses where you go through some dark hanging material and instantly disappear into the house. Or it is common in movies to have a character push through into a doorway of some type and for the door way to grow closed behind them. That’s what the forest and the PCT seem to do to me today. I went from civilization to remoteness.

During my morning prep and pep talk, I was confronted with this elevation guide for the day ahead. Yikes. I long knew the first full day was going to be a slog, but with the mountain in front me – well, it was far from the abstract idea that was a lot less intimidating. So much for the pep talk!

Whomever talks about the peace and quiet of nature certainly has never been in the Pacific Northwest temperate rainforest at 5:30 AM. All my camping has been up near timberline where birds are more scarce – but down here where life runs optimized and without constraint, it’s not just the plants that fill the visual senses – the birds gave a full orchestra of competing overlays and ever increasing uniqueness to be heard over the cacophony of chorus being layered up. It was all out war – after about 45 minutes of crescendo they petered out in exhaustion.

I got up and set to work trying to establish a morning routine. The more efficient I could become with it, the more mileage in a day.

I remember yesterday filling up the water bottles with tap water and conserving this “blessed” water because it was bug free. Ah, but the taste of water from the streams here is what I crave – I almost tossed the precious water I carried from the city for a day. But .. that would just be romantic foolishness.

I moved on to the trail, and she was beautiful. The mainstays of the human mind’s desire for structure and order are straight and perpendicular lines. They are comparatively rare in nature vs a city. That’s why I got a kick out of seeing this right angle along the way – it was like one final farewell to structure: When I’m asked on the trail where I am headed, I feel very Mark Leavian by replying with the simple word “Canada” and then watching their reaction. Twice I’ve gotten a “ah, the PCT! I’ve always wanted to do that” which is interesting in that it is a response about themselves and not further about me (which is just fine). It’s interesting in that it reveals insecurities or passions – either way, it reveals details into their psyche quickly. Like I said, very Mark Leavian. (He once told me that the quickest way to find out about a woman is ask her if she has any kids). Definitely cause for study on future interactions. As I move further in, the day hikers I pass have now changed with the distance into trail runners and then changed again into weekend campers. I’ve started to ponder how easy it is to spot a PCT hiker – but with a dataset of zero, I have no data (can’t count even myself yet). Nothing like a mosquito swarm that casts a shadow. Hiking the PCT is a different style mentally than normal hiking in many ways I did not think about pre-trail. For instance, every step, every moment is singularly unique. Sure, a day hike can do a loop, but you can always head back the way you came. Here, you have to appreciate every step for it will never be experienced again. You leave something behind, no going back. Your mind is freed from the past and forced into the present. In fact, with the destination weeks away, so too goes the future. There is no destination, but only now, on this trail, with every moment unique. It’s a wonderful reminder as to how to live life. Similarly, I soon realized that with every step never to be seen again, so too will anything that I leave behind accidentally. And with everything in my pack serving at least two purposes, losing something can be critical. I quickly got in a fierce habit to never leave a resting spot without taking an examination for forgotten items.

Let’s talk about the trail for a second. Most of the time it looks like this: Some of the times you get lucky and get a view like this:

Or your blessed and get a view of a volcano, like this first glimpse of Mt Hood over Table Mountain. Sometimes you really had to search for the trail (this next image is taken with the trail in the center of the image): And then sometimes you go through a clear cut and it is not quite so natural anymore: Walking through clear cuts and seeing brush piles, they remind me ramparts or piles of Mideavel post battle body piles. All analogies are of war and destruction. It was really clear when the PCT separated from any other day hike and overnight trails. Trail quality went down a notch and the people disappeared … except …

Halfway up the mountain, I was passed by a hiker like I was a beat up Chevy pulling a load and he was a BMW highly tuned for speed. Yes, clearly he was a PCT hiker. His pack was 2/3rds the height of mine including the ice axe. He started at Crater Lake and is headed to Manning Park, trail name Weatherman.

I got some quick trail gossip:

And with that he sped off. I realized afterwards that chances are likely we will meet again 100’s of miles north of here and another equally if not more so remote location. Strange to think – I now know two events in my future on the trail if I succeed at completing it. I did get my first sighting of Mt. Adams as i gained in elevation: When I reached the peak, I was greeted by a very curious hummingbird. It hovered for a good 30 seconds before leaving, totally checking me out. The spirit of my youngest daughter is with me. It was as if it were verifying it was me before spreading the word through the Hummingbird Network back to her that I’ve been spotted.

Met a trail runner briefly who was running a one way marathon that intersects with the PCT. She was desperate for water so I spread some Trail Magic around and filled her up – but alas, soon realized a I did little too much as much water levels dropped to a single 700ml bottle with still 6 miles to go to the next water. That’s a mistake I won’t make twice – maybe just half the water. Weatherman and I traded trail stories well into the night and I headed off to bed at 11:00. The notes for this campsite says “hang your food; beware of rodents”. The sound of gnawing rodents sounds exactly like gurgling water. Should be an interesting night.