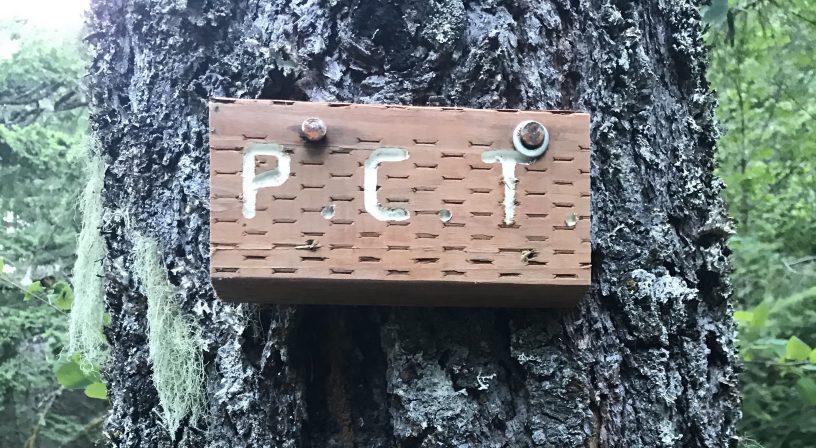 Doing an extended hike is a weighty thing, so let’s get some weight stats:

Well, it has begun. And the beginning for me is at the imposingly named, Bridge of the Gods – named after an Native American Legend of how the Gods built a natural bridge here to cross the Columbia River due to a massive landslide a few hundred years ago that temporarily dammed the Columbia.

I began with my wife and daughters dropping me off before the bridge so that I could officially begin the trail in Oregon (and so doing also claim to walk every inch of Washington if I were to be successful).

I read a funny thing in the shared log book that PCT hikers use about the Bridge of the Gods:

mkasha: if only one day an orchestra would provide Trail Magic in the form of dramatic music as you walk across the bridge. That would be wild. 8/25/16

I thought about this as I was walking the bridge, which was more terrifying than you’d expect. Heavy winds were being funneled through the narrow channel, and the bridge was not built for pedestrians. Being made of metal grates I could see clear to the river with every step. I thought of the dramatic orchestra playing as I watched the cars pass by filled with an sundry of characters. Bored kids looking at their backseat windows, tourists with their phones making videos never to be watched, drivers frustrated that they had to maneuver on a bridge around some hiker.

Goddamnit, this is my moment, I thought selfishly? My big beginning. Where is the dramatic music? The people waving? The crescendo of excitement for my launch?

And then I turned around and saw my family cheering and waving goodbye at the bridge’s edge and knew I had everything I needed, and then some.

After crossing the bridge the trail ducks into the woods behind a beautiful PCT sign. I talked here with two twenty something gals from LA who were imagining their inner Cheryl Strayed for a day. One had beautiful blue eyes, one has beautiful green eyes. I put the vision of both colors on my left and right hiking poles and started the hike. As I began the hike, I realized immediately that all the wildflowers beneath my toes would be unique on my trail. I am heading north and up from this near sea level beginning – which means that I won’t see comparable flowers for some time, if at all. So of course I started taking pictures (when did we stop using the word “pictures”?) – particular the self heals which were vibrantly in bloom today, and whose name seemed to be a great name to start a trip. As I enjoyed the bloom of all the wildflowers (self heal, larkspur, asters, vetch, just to name a few) and the reflecting of all the time spent on cataloging wildflowers in my youth, I found myself enjoying even more that plant life. The beautiful shades of green, the incredible textures, the variations in Darwinian optimization. Moving from wildflowers to wildleaves mentally seemed like an apt analogy to getting older: you have seen enough of the world that’s fighting to knock you over the head and competing for your attention. Now is the time to appreciate those things that require work and subtly to find their beauty, and in so doing, they hold more richness in their understatements. I also learned quickly that bug shirts do work – except not on your face and hands. As I climbed upwards I caught a few beautiful vistas of the Oregon side of the gorge. Sadly, it is now just a brown fuzz due to last years’ forest fires. I did see one interesting tree phenomenon, making me think of my budding naturalist daughter. It look like a tree broke off high above the ground and another tree that had already started growing had grafted itself at that point, sending out a spray of roots in mid air, searching for ground. I can’t say if that is what really happened but it’s my best guess. Crossing a bridge I soon came to my campsite, sharing it with a Day camper for the weekend that didn’t ever even say hi. That’s ok with me today. I closed the day off scarfing down a banana nut bread Pro Bar, freeze dried beef stroganoff (who knew beef was crunchy?), and a hot chocolate. Every single one was the best tasting thing in the world at that moment.

My first day was completed – I had started.