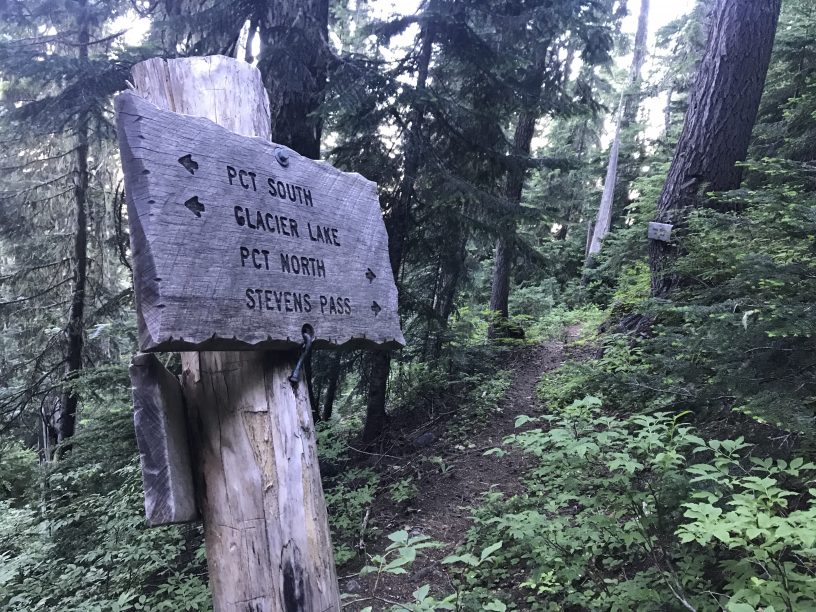 Day 26: The Wheel of Morality

Given how incredible my tent site was last night, I hardly shed a tear in failing to see an alpenglow spread over Glacier Peak with the sunrise. The view still did not disappoint:

As I packed up my tent, still savoring every last sip of the views, I was delighted to be visited by Henry the Canadian one last time. I let him know that today was my last day on the trail before being shuttled north to skip the next major section. I simply had run out of time to make it to Canada without a shuttle skip.

Looking down in the valley I noticed the morning inversion layer creeping over the valley floor with clouds, making it feel like a sea was flooding into the mountains where I stood.

And the heather this morning was spectacular:

Today, my destination was the Stevens Pass ski resort where my father would be waiting at 6:00 pm to help me with a shuttle to Hart’s Pass tomorrow morning. I had a reasonably full day of hiking to get their in time for the 6:00 deadline. Once I picked up steam on the mostly downhill traverse to Stevens Pass, I starting meeting the latest surge of south bounders (about 15 or so), and a few section hikers. It is interesting, as the trip has gone on, the southbounders have generally moved to be increasingly idealistic, out of shape and appearing to be in over their heads – despite having encountered far less challenging hurdles (e.g. snow, melt water) than those who have already made it much farther and faster down the trail. It seems that the trail is pretty efficient after only two weeks to start separating wheat from chaff. I wish I could invest in PCT hikers in their likelihood of completion.

Knowing today was the closure of another section of the PCT, I tried to also bring some closure to the examination of character and belief system introspection that I’ve been doing thus far on the trail. A circle came into mind: I see Thoreau and Whitman both influencing me strongly – both favoring the value of nature and simplicity. Both pushing for a level of transcendence. But yet they also sit on opposites sides of the coin when it comes to the love of their fellow men, or in the level by which the embrace dualism.

Similarly, David Brooks and Ayn Rand share a common push for reason and the building of a moral code. They both embrace the strength of the individual. But yet the diverge to opposite extremes when it comes to embracing the “Adam 2” – the striving for moral rectitude from sacrifice and sin.

All four are gravity wells at the moment to my soul and offer beacons for a direction of how I wish to be. All four are valid and have defensible claims on my belief structure for worthiness.

And as a sanity check, there are other approaches that are clearly outside this simplified circle that have no interest to me. For instance, the moral code exemplified by Trump is clearly not a beacon for me – I include his name to remind me that while I struggle to balance these four names with each other – they are nonetheless still within the sphere of possible consistency and that there are other beliefs clearly rejected.

To add more detail onto the continuum implied above:

I pondered all this while watching the expanse of the inversion layer lift the mountains into islands across a vast sea merging into the ocean.

So now to add myself:

Back to the views – one more peak before the trail tucks behind and heads for the valleys (actually still a couple up-downs from here):

And also a small note – I’ve been amazed at how many amphibians I’ve observed on the hike over all the days. It gives me hope – one lacking in the urban watersheds.

The downhill accelerated and I dove into Ayn Rand fully. One foot, two foot.

By 6:00 PM on the dot, I had made it to Stevens Pass where I found my father waiting.

Beat and tired, we made it to Leavenworth for a German meal and then on to Wenatchee for a  crash sleep.