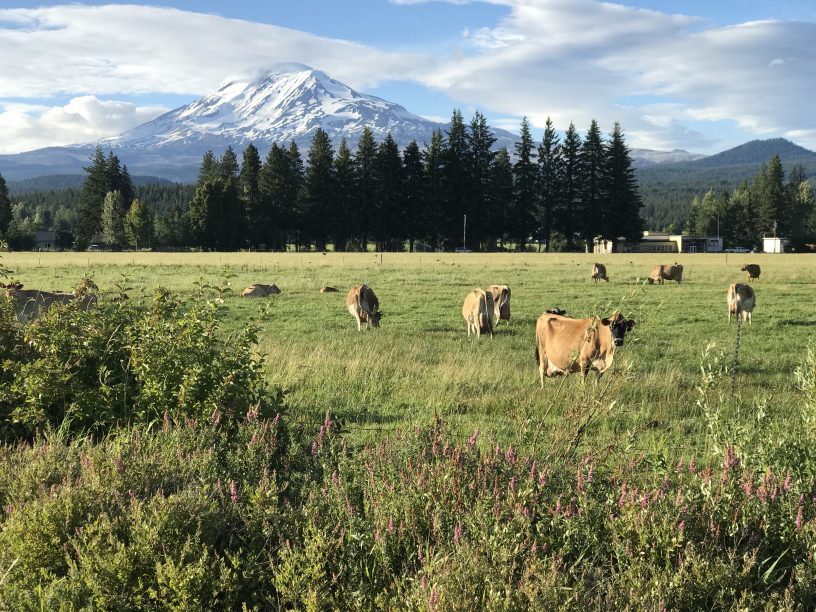 In PCT lingo, when you take a day off and progress zero miles along the trail, it is called a Zero Day (or just Zero – as in “I’m taking a Zero”).

Well I decided to do that in full force, achieving a whopping 2,744 steps in total (but I did bike 3 miles at least).

I spent the day largely updating the blog from the past week – a good reliving of the week thus far. I also worked on getting that cough under control with lots of tea, and massaging my Achilles back into a normal state. I also took inventory stock to figure out what to get at the general store tomorrow before pickup.

I largely stayed away from people but ventured out into Trout Lake again to taste the local life. And of course soak in the pristinely bucolic scenery on the bike ride into town: This time I decided on the other restaurant in town, where I hoped to order a steak. I passed by the General Store in the way there. The restaurant had a log cabin feel – classic small town restaurant. It was a busy Friday night for them, but in contrast to last night, the staff were not handling it well. And I found out later the owner was a transplant from NYC and only added to the stress. You can take the woman out of the city, but you can’t take the city out of the woman.

So I chatted up my two bar seat mates. One was an 80 year old woman named Shirley who laughed at everything, but I’m not sure she heard anything I said. She nursed a beer in the bottle all night and just about anyone who came in the door knew her name and said hi.

My other bar mate was Jerry, a forest guy that had a long career working for the Department of Natural Resources. Now retired, he told me stories of firefighting across the state and measuring plots of land for timber sales. I plugged away on every question I could think of to keep him going. Timber, drones, politics, USFS – DNR rivalry, town politics. I even asked about Sasquatch and told him my stories from yesterday. His response was “I know people here that would fit that type. Thing is here, even if you don’t like someone, you can still find someone who does like them.” I chewed on that before coming to conclude that this piece of small town wisdom had a lot of merit to it. Something missing in neighborhoods and cities. There is always someone there you can find to bridge the gaps to keep the peace.

The third bar seat mate was a colorful character that was a logger. He was plump in his late fifties, wore a hat and vest similar to Bavarian German style, but with his shirt fully unbuttoned. His current job is to load the trucks with the logs and possibly drive the trucks too. I lived in a one room shack out behind the restaurant. It feels strange writing him right now, as I am not certain – but I may have just summed up this man’s entire adult life with this paragraph.

I ran into a bit of trouble when it came time to pay and I realized I didn’t bring any money. The waitress was find with taking a digital copy of my credit card but her NYC expat boss had been checking me out to see if I was swindling her.

So after a momentary testy exchange (made worse when I said I was a PCT hiker) I pulled out the charm and we started chatting over those “sons of bitches credit card companies that were out to rob small business blind”. That clicked, and we traded stories on parenting, taxes, urban life. It reminded me of the point in Alice’s Restaurant where all the mean evil guys couldn’t get near dear Arlo because it was arrested for littering, but they all slid over and put their arms around him when he added “and creating a nuisance”.

I was grateful in the end for her willingness to take the car number – and left an extra big tip to compensate for the additional burden of typing it in.

After paying, Jerry walked me out, telling me that he really enjoyed the conversation. I declined one last time for a lift home and rode the bike back through the fields.

What a gentle day. And I think my cough may be gone.